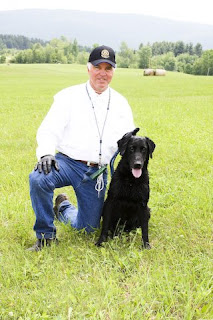 Have you ever had a dream? Did you ever aspire to do something, or hope for something? One of two things usually happens once a dream is born...you either make a plan and act on it--therefore having at least a chance of making it a reality--or you keep dreaming.
Back in 1996, Charles Bearden of Wichita Falls, Texas, had a dream. At that time the owner of one Labrador named Dusty--obtained on the recommendation of good friend Mac McGee from breeder Dan Denicus--Charles had been to and worked at a few of his local club's field trials, and this served to whet his appetite to learn more about training, the people, and especially to see the best dogs in the country. He wanted to watch the cream of the crop. A little research revealed the National Amateur that year was going to be in Stowe, Vermont; having not been to the Northeast before, he planned a vacation with his wife, Vicki. And off they went.
Heralding from west Texas, Charles had a background in horses and cattle; he knew the importance of bloodlines and jumped to the conclusion that the same must be important in performance Labrador retrievers. So, prior to his arrival in Vermont, Charles studied pedigrees and had in mind some of the dogs he was hoping to see.
Charles and his wife arrived and watched most of the National (with a few sightseeing trips in afternoons, promised by husband to wife as part of the deal, to places such as the Trappe Family--from Sound of Music fame--Resort).  As Charles says, "I was just another face in the crowd. We blended in with everyone, which is one of the great things of this game. People from all walks of life and economic backgrounds come together over these dogs. We watched and people were very friendly and helpful toward us."
Two of the dogs Charles had his eye on were Zipper (FC-AFC Rebel Ridge Cody's Mischief) and Dinah (FC-AFC Candlewood Rebel Ridge TNT) and they didn't disappoint Charles. As with most of the dogs at the National, he was impressed with their performance (and indeed, Zipper was a finalist that year) so he took a leap of faith.
With just a bit of trepidation, he drew a deep breath and approached Lyn and Larry Wharton (then married) and made a suggestive comment: "I don't know if you've thought of this, but in the event you ever breed those two dogs, I'd love to buy a puppy!"
Every six months thereafter, Bearden sent a letter to the East Coast inquiring on the status of this theoretical cross. A few years later, it did indeed transpire and Bearden was on the phone immediately to hammer out the details.
He got that puppy.
And over the years, he's invested the blood, sweat and tears necessary to make a good dog and to get ahead in this sport. He's dedicated and he works hard at improving himself and his dogs and he's a constant study of the game in all aspects.
And he's here this week, qualified with #22, AFC Lake Park Cody's Zipperoo, or "Rudy" for short, bred by Lyn Yelton and Larry Wharton. "And Stowe looks just the same as it did back then!"
Charles also shared some comments he feels are benefits that go hand in hand with the retriever game: "We get to meet good people, see the country...and most of all, we have the opportunity to play with one of God's greatest creations."
Rudy and Charles will be coming to the line to try their hand at Tests One and Two in just a few dogs. There's no telling how it will go, but Charles feels that in many ways, he's come Full Circle with his dream.
Indeed he has. And we wish him the best of luck.
And my heartfelt request to you? FOLLOW YOUR DREAMS!
Posted by Nat'l Retriever Championship by Vickie Lamb/Retriever News at 10:26 AM