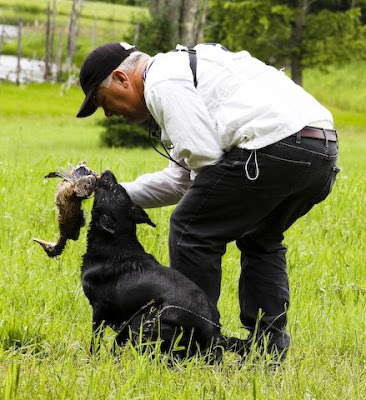 "I debated on whether I wanted to do this--come to the National--it seemed like such a huge time commitment. But then I also thought this might be my only opportunity to get here, and I felt I owed it to her..."

Now, you may jump to the conclusion that he means "Sinner" when he refers to "her" but he just might be referring to previous co-owner, Martha Voshell, (now deceased) who was responsible for Jeff's involvement with his beloved dog.

Telander had been in the competitive obedience arena six years ago and had earned OTCH... He went to Connie Cleveland for higher learning toward field and hunt tests, and -- presto -- he got hooked on field training...and never looked back.

Five years old when he picked up his first bird, Jeff's dog, Broad Reach Diesel, finished to QAA a year and a half later. Diesel may have continued on from there but due to an injury was retired.

Now, enter Martha and Buddy Voshell, friends who operated a triple-purpose Labrador kennel for bench, obedience and field performance. Martha had been diagnosed with metastastic cancer when she informed Jeff she'd bought a dog for him. It happened to be from a cross done by Milly Welsh and Charles Hayden.

People often asked Martha why she got a field puppy at this stage of her life--with such enormous complications to face--and she'd say, "The devil made me do it." That, coupled with the fact that this puppy's sire was FC Runnin with the Devil set the puppy's name in stone. Broad Reach Devil Made Me Do It, or "Sinner" hurtled into the field trial world. That was Fall of 2002.

Jeff did the basics and then sent Sinner to Jamie Balesdent for a winter. Alan Pleasant also had her for a year. Then, Jeff brought her home and resumed her training until he bcame faced with a heavy job workload; he now places her with Dave Smith in the summer and winter while he keeps her fall and spring.

Since last fall he's picked up an Amateur win at the Down East trial and also won Blue Ridge's Open this spring. With a second in the Open for Dave Smith at Snowbird, Sinner is also qualified for this year's National Open.

"Everyone was helpful. And I want to thank Allen Voshell for his support and his interest in Sinner."

His thoughts on this National?

"I've had a really good time, but it's all much more grueling than I anticipated. Up late, back up early...it's not a restful experience! I wasn't prepared for how demanding this really is.

"But now that I've done it one time, I want to do it again--I want to qualify and come back and see what we can do!"
Posted by Nat'l Retriever Championship by Vickie Lamb/Retriever News at 6:33 PM