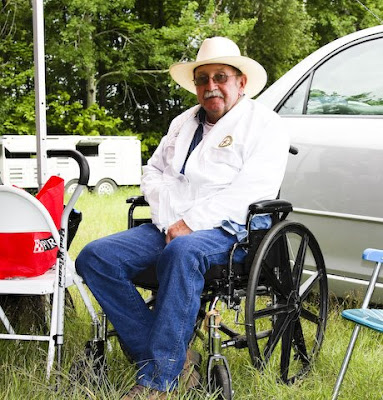 Wrong. Well, I remember hearing some story about how he recently went to Argentina and had a blazing time down there.

But, did you know that Fenner has never missed a bird in his entire National shooting career? And now, while shooting with one arm, he maintains that streak. The only concession is that he must shoot at non-retired stations as it's difficult to move his wheelchair quickly; it's no problem to accommodate this situation.

What happened to Dick Fenner? A freak accident, the kind none of us expect, hit him, literally, soon after last year's Utah-based National Amateur. He fell off a ladder and struck his head. But, he insisted he was fine and it was that evening before his wife was able to drag him, under protest, to the hospital. It was a few weeks before he was diagnosed as having had a stroke; whether or not the fall attributed to that is unknown.

Scheduled to be Captain of the Guns for Morgan Hill in California that November, he was heavily involved in rehab so able Ron Foley took over.

But, here he is again, ready, willing and able!

(Richard Smith, Eastern time zone's Co-Captain of the Guns, explained some things about the Official Guns for me to share with you. The Guns have a Captain and Co-Captain for each time zone, and they are self-inclusive, responsible for every detail to facilitate smooth running of the Official Guns and smooth shooting rotations at Nationals.
With an admirable working system in place, the Guns rotate duties and keep tallies on every member so that the shooting of flyers and popping at dead bird stations becomes evenly distributed for all. And, when any Gun is running a dog in a National, he doesn't shoot until such time as his dog goes out, if and when that occurs.
Also, each time a Captain of any time zone retires, the current Co-Captain moves up in rank and then picks his own Co-Captain. For example, Richard's father passed position of Captain to Dan Kingston [edit--prayers for Dan Kingston's family and Godspeed to Dan, who passed away June 23...he will be missed], who in turn passed it to Bruce Doing and Richard is current Co-Captain and will move up, as did his father, when Bruce retires. )