The Heart of Pogo 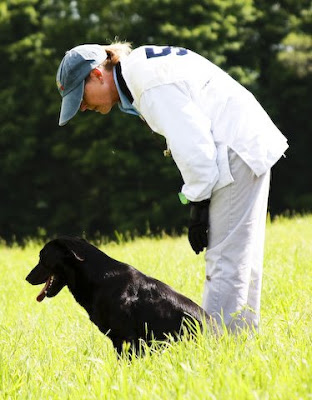 ...I wanted the story of Pogo. So, all week I pestered her co-owner until we finally pegged some time to fill in the blanks around that which I already knew about this neat little dog.

Here goes: Veteran field trialer Martha Russell has raised a number of puppies for Judy Aycock. So, it was nothing unusual for her to step in and offer to raise another for her, this one out of "Ford" (FC-AFC Fordland's Bored Out Ford) and "L'il Ms" (L'il Ms Hot Pursuit).

When down in Texas for a nephew's wedding, Martha met with Judy and played with the puppies in that litter.

"Which one do you want?" Judy returned.

Since Martha was taking the puppy in the plane's cabin with her, she elected to choose the small female; Pogo was eight weeks old.

She kept her for about six months, and by that time, Trumarc's L'il Ms Pogo was blossoming into a special little dog that could not only mark but run hard while doing it...and was unusually strong in the water as well.

Judy ran her in a few Derbies. However, when Pogo was between one and two years she came down with a mysterious illness. No diagnosis could be made, but she became deathly ill and almost died. While fighting to live, she spent much time in Judy and Ed's home being nursed back to health. With a pitiful appetite, she'd barely nibble at little cans of Mighty Dog. Then, just as mysteriously, she rallied and began to gain weight and improved in general. Soon, she was back at field trialing--she still wanted to play the game--as she placed fourth with Judy in an Amateur when she was just two.

Due to personal reasons, Judy decided to sell Pogo. Danny Farmer looked at her for a client who decided she was too much dog, and then Martha approached John about buying the plucky female. John consented and the Russells left Pogo with Danny for several months.

"Maybe as long as a year," Martha stated. "But we originally bought her for John to run, because I was running Pow at the time. So we took over. John had great success in running her, but never felt comfortable with training her."

(A note from me: Indeed, he did, as I enjoyed watching him with her several times, most notably in Klamath Falls, Oregon a few years back at the National there when she finished as a strong contender for the title.)

And how did Martha end up running her?

"I did all her training, and John suggested I start running her, too. She's a neat little dog...special, like she was as a puppy."

And she's special indeed. She decided to go on living, and she's finished a National with John and now one with Martha.

And that's the story of Pogo. For now.
Posted by Nat'l Retriever Championship by Vickie Lamb/Retriever News at 6:34 PM