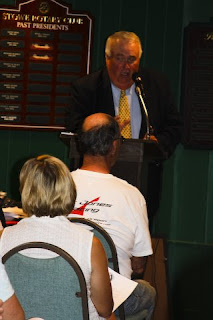 Specifics from today's meetings can be found on Jean Wu's recap of today's activities; included are the particulars for running order/rotation, handler instructions, how no birds would be handled and the like.

As mentioned in an earlier post, the first test dog will run at 7:30 a.m. It was also announced that the caravans would leave Shaw's Grocery on north 100 for the grounds which are only about ten minutes from that location; the first caravan (workers) would leave at 5:30 a.m. Signs will be posted from this grocery en route and to the grounds.

The expected test is a double with a blind.

Shortly after the meetings ended, a brewing storm let out its force on the community of Stowe and National goers. Additional storms are forecast through the evening with an 80% chance overnight.

And as I write this, thunder is booming and lightning is flashing everywhere, threatening for more rain in the coming minutes. As a matter of fact--Here it comes!
Posted by Nat'l Retriever Championship by Vickie Lamb/Retriever News at 9:21 PM