And back to this morning's training... 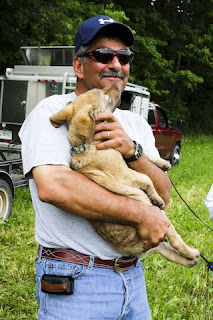 Daylight comes early this far north and it dawned with a cool yet humid touch and the promise of a pretty morning. Training groups migrated to their designated areas rather quickly and began their setups for the day; some groups that I dropped in on were able to get in two training tests while others did just one. Was this due to group size? Perhaps, but in some cases, small groups elected to do just one test and wind things down for the day.

The large training group of Patopea, Arthur, Attar, Pleasant, Koonce, and Harp merged this morning after having been split up into two smaller groups (back in New York state) for the earlier part of the week, and they efficiently managed their dogs with a makeshift judge, marshall, and a series of holding blinds as they did a wide open double followed by a blind off the left hand gun and deep.

I also found and/or talked to the training groups of Danny Farmer and of Dave Rorem, and the amateur groups of Talley/Dorobek/Darnell/Goettl/Stonesifer and also the Jack Vollstedt group...tests consisted of straight-up wide open doubles, double with a blind to the side, double with a blind through the middle and/or run first, and three singles. Hen pheasants were the popular bird of choice for training--no big surprise there.

Cover is extremely high in many of the available fields in this area, although there are some fields of reasonable cover depth and height as well...and of course those fields were coveted by all groups.

One thing that I not only noticed but also heard comments of revolved around the tendency to really emphasize line manners in pre-National training, whereas that is not always the case with a number of trainers throughout the bulk of the year. The question and the thought was/is then raised as to how much this preoccupation or focus on line manners may or may not affect the overall performance and attitude of certain dogs.

All groups operated smoothly as I saw it and were in the groove of dog work.

By noon or before everyone began heading to headquarters to pick up handler's packets and get ready for the meetings--one would center around rules (Retriever Advisory Committee), one around the RFT Entry service, and finally the meeting regarding National business. In the lobby of the hotel during this time, the Merchandise Committee had their clothing and gift items spread out and this, as always, was a high traffic area as people bought new shirts, hats, jackets, and the like. Friendly banter was shared by one and all prior to the meetings.
Posted by Nat'l Retriever Championship by Vickie Lamb/Retriever News at 8:57 PM