When the going gets tough... 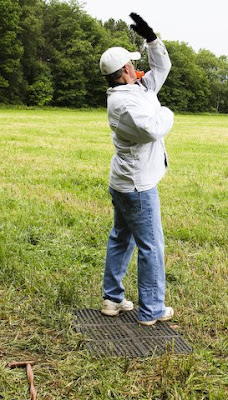 
Many of you know real estate icon Benjy Griffith of Macon, Georgia from "back in the day" when he competed in trials (1980s) with such dogs as "Doc" (FC-AFC Another PHD) and his pride and joy, "Red" Hawkeye's Indian Red, a little golden male that ran like the wind, in Benjy's previous days in the field trial sport. He also owned Super Babe, a female that he sold to Lanse Brown; this little female amassed over 100 all-age points.


Benjy was as healthy as the best of us when one day, while playing a rigorous game of tennis, tragedy struck him on the court as he tore a carotid artery and was disabled immediately. He was rushed to a major medical center where he received all the necessary care and was put on a hepa-drip, but at 5 p.m. his condition became grave as he threw a clot. This was July, 2005.


Brain damage. Loss of control to his right side. It's been a long haul over the past 2 1/2 years but he's worked hard at rehabilitation. This involves technical advancements and old-fashioned treadmill work. He still has no use of his right arm, has extreme difficulty making his right leg work, and he has trouble with speech.


He can't play tennis anymore. He can't do many of the things that he used to take for granted...(probably, things many of us are guilty of...taking for granted, that is). But, this has brought him back to the dogs in ways that are very meaningful and special to him.


And Benjy has run this National through series five with #107, Premier's Iron Man Ozzy, "Oz". Although snap decisions are quite taxing, he's dealing with them while experiencing the joy of running dogs again.


Think about it. Benjy cannot use his right arm. In order to give right-hand casts, he uses his left arm by crossing it over to the right, as you can see in the enclosed photo. He also can't walk very well, but although he uses a cane to reach the line, he abandons it to move about when handling...and deals with the problems he encounters with a leg that won't work right when he has to move fast.


In the fifth series, Oz took off for his second retrieve, sent for the right-hand retired bird set against the tree line. He disappeared around the corner of the woods just deep of the bird, and when he reappeared, he was steaming across the field to the left. By the time Benjy was able to react with a whistle, Oz was at least 100 yards from his bird and it would have required massive right-hand (arm) casts to hope to recover the bird.


Up to this point, Benjy was in pretty decent shape with Oz. He assessed his situation, and accepted that what was required would be more than he could handle at that moment. He called Oz in to him. And he turned to the judges and politely said, "That's it. Thank you."


"You don't want to handle to that bird?"


Benjy realized his limitations at that moment and accepted them more graciously than might be expected.


Bird dogs, coonhounds and especially his beloved retrievers help to keep Benjy focused and working toward more rehabilitation. He's not giving up.


He is living his life.


Please...live each day to the fullest!
Posted by Nat'l Retriever Championship by Vickie Lamb/Retriever News at 3:57 PM