Neither rain, nor floods, nor closed roads... 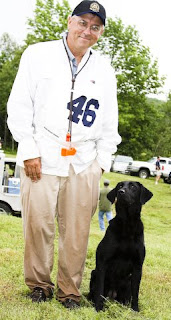 ...were going to keep John Skibber and his dog Tess from running their first National. Literally speaking. Skibber, a surgeon, had trouble taking time off but planned to train a week in Iowa with Tess and trainer Scott Dewey before hooking up with Scott's friend and fellow trainer, Kenny Trott, at the National.
Just a day and a half into Iowa training, that massive storm system we've all seen on the news hit the Hawkeye State with force. Flooding chased Skibber out of Iowa while Dewey was left to deal with rising water in his parents' home. John hit the road at 3:30 a.m. that Monday, headed for Plan B (training with Wayne Curtis) and encountered detour after detour due to closed roads. Finally, he arrived in Wisconsin and was able to train with Wayne, Rick Wilke and Pete Hayes for a few days. Then, rain hounded him to Vermont where he hooked up with Kenny and trained Saturday morning.
Skibber, #46, grew up in Pennsylvania and hunted with beagles. It wasn't until he began his medical career in Texas that he obtained a Labrador. "A retriever is the hunting dog to have around Houston," he stated.
As is a familiar note with many of us, his first Lab was a $250 newspaper find; that dog eventually became qualified all-age. "I've paid a lot more money than that for many dogs since then that never became QAA!" He laughed dryly.
Much help was obtained from training partners Jerry Wickliffe, Ed Fullerton, John Monroe, and W. Stupka from the Port Arthur area.
And it was time to move on to a competitive dog as John became more addicted to field trials. He settled on a Maxx (Lean Mac) x Mx. Costalot puppy and to make the story short, traded that dog Archie (Archer's Paradox) back to Judy Aycock in exchange for a Kweezy (FC-AFC Trumarc's Lean Cuisine) puppy.
"I didn't care who she [Judy] picked as a stud to breed to Kweezy...but I knew I wanted a female puppy," John shared. "And I just wanted to stay in field trials more than anything."
Kweezy was bred to FC-AFC Code Blue and John's puppy from that first Cody x Kweezy cross is here with him this week.
Her name is T Street Tess.
"Tess is a special dog to me. You know, she reacts like a dog, for example, like when you let her out with other dogs, she'll cut up for a few minutes--she does things other dogs do--but her most endearing quality is that after she runs around a bit she'll come back and just stay and walk with me. She enjoys being with me."
They've completed the fifth test this morning as they were third to run.
I asked John to explain what this National means to him.
His response was immediate. "Think about it. It's the privilege in being here...to see these dogs and some of the best combinations of retrievers and Amateurs in the country. These dogs give us remarkable performances while they do what they were bred to do, and that is to retrieve game. That is the biggest part of this whole thing for me--to see them do what they were bred to do--and they do it so well.
Posted by Nat'l Retriever Championship by Vickie Lamb/Retriever News at 11:05 AM