Kicking off the sixth... 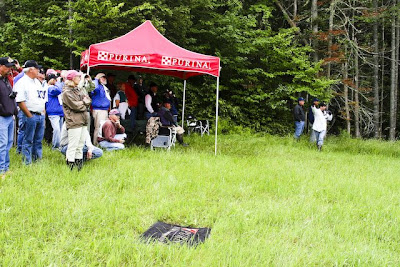 
I'll post some pictures in a few minutes. By now you've heard the results from Wicked Wednesday, with 27 dogs dropped (posted on Jean's page--she has 26 listed but her numbers don't include #119, Stan Chiras, who had to scratch Susie before the start of the fifth due to an injury that is getting worse) from the fifth test...and 50 dogs are remaining to vie for 2008 National Amateur Field Champion.


(Photo shot during the test dogs.)
Posted by Nat'l Retriever Championship by Vickie Lamb/Retriever News at 8:10 AM