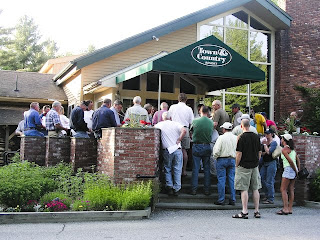 Stowe is a charming "village" as many of the locals say, not far off the beaten path of I-89 north up Vermont 100. To get there one has to pass through Waterbury and go by (if you could) the Ben & Jerry's ice cream factory, and a number of other tempting establishments selling cheese, antiques, chocolates and assorted interests. And, throughout this afternoon people have been descending upon the quaint and picturesque community in anticipation of tomorrow's aforementioned meetings and necessary preliminaries always scheduled before each National officially begins.

It's very noticeable that everything is green around Stowe. Although "green" is an operative word in today's society, it's used here strictly in its native sense. Everything is green. Grass, trees, fields, more grass, as the cover is quite high in places...but everything is lush and, you guessed it, green.

By this evening, just before 7 p.m., contestants gathered around the front entrance to the Town & Country Inn (Headquarters) in Stowe for the nightly "draw" to determine which groups would get which training grounds for Saturday morning. Although there was much banter and light conversation, tension filled the air as well, partially attributed to the fact that this would be that last training session before the onset of National competition. Everyone wanted a suitable area to work on final tuning or to perhaps iron out something that has cropped up in the past week.

As soon as final plans were made, however, folks dispatched quickly for eating establishments and some hope for sleep as morning will come early. Most training groups start between six-thirty and seven a.m. to get one or a few good setups in before it's time to call it a day. It will be interesting to see what some of these groups do on this final morning, as well as how the dogs are running and how handlers' nerves are holding up. (What frame of mind would you be in this night? There is much to think about, tons to speculate, and a lot to worry and wonder...we'll see what tomorrow brings.)

See you then...
Posted by Nat'l Retriever Championship by Vickie Lamb/Retriever News at 9:05 PM